Each time we go diving we must rely upon our training and experience to stay safe under the water. 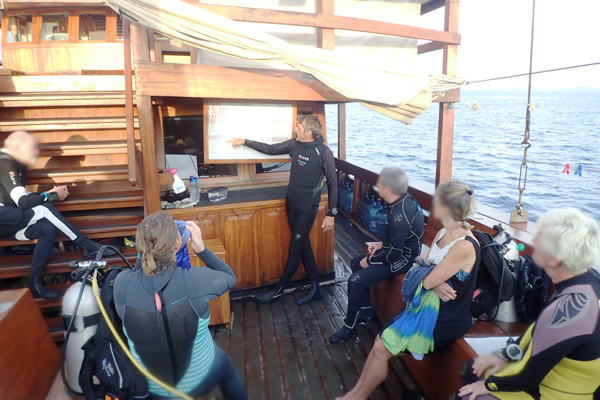 No one wishes to run into an emergency situation but we all learn the techniques required to manage them.

What follows is an account of one of those times my buddies needed to rely upon their experience to get through.

It was day 9 of an 11 day liveaboard trip in the remote Lesser Sunda Islands of Indonesia. We were excited for the dive, which was a new site for us all and there were no other boats in the surrounding area.

As per usual our guides went to the site first to check the currents after which we received a thorough briefing from our cruise director.

Heading off in small groups we rolled in and made our descents.

All was great, the corals were bursting with life and a curious hawksbill turtle was ambling along.

We were all blissfully happy photographing and filming in our small groups.

As group 1 came around the side of the reef they experienced a strong down current and eventually, unable to fin against it, they drifted off the reef..

The current took the 2 divers and their guide at a fast pace into which direction they were not sure. Sticking together, 1 diver attempted to send up his DSMB only to find that the string was not properly attached and it shot away from them. He quickly reached over and took that of his buddy, who was holding tight to her camera, but with only a short line on that one, they realised they would need to ascend to a shallower depth before it would be possible to deploy. The 3 divers continued to drift further off the reef, experiencing some tumbling in the fast, changeable current. After some minutes, what felt like ages to them, they eventually reached safety stop depth, deployed the DSMB and made an extended stop to allow computers to clear.

Meanwhile, having felt the current ourselves, my group turned around, but after some time we realised we had not seen group 1 pass us by on the reef wall. Thomas and I made our ascent and alerted the tender drivers, noting the direction of the current we had felt. The tender drivers radioed the liveaboard and the on board crew began to scan the horizon for an SMB at the surface. Upon surfacing the drifting group found themselves an extremely long distance from the liveaboard, but mercifully quite close to the shore. After 10 minutes of agonising wait on the surface, waving their SMB as high as possible and seriously contemplating swimming to land, their tiny orange glow was seen by the liveaboards head engineer and a tender boat was dispatched to pick them up.

The divers arrived shaken but safe back to the liveaboard.

Now we can reflect and even laugh (nervously!) about this incident, but the reality is even with current checks and experience, you can find yourself in a difficult situation underwater.

We used the free DSMBs provided by the liveaboard to save on luggage weight however the group failed to check their function during the previous dives. We certainly learned a great deal from this experience!

And on our next trip we brought our own Surface Marker X-Markers along.